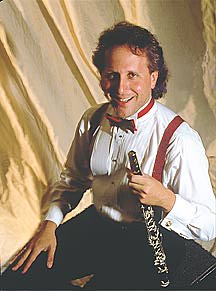 Jonathan Cohler is recognized internationally as a virtuoso clarinetist. Through his performances around the world and on record, he has thrilled an ever widening audience with his incredible musicianship and total technical command. Fanfare Magazine has compared him to one of the giants of classical music—“one thinks of Dinu Lipatti”— and the magazine dubbed Mr. Cohler's performance “superhuman.” The Clarinet Magazine of the International Clarinet Association recently declared Mr. Cohler “an absolute master of the clarinet, technically and tonally.” A highly acclaimed recording artist with an extraordinarily wide repertoire, his release The Clarinet Alone, was a Nominee for the INDIE Award presented by the Association for Independent Music (AFIM). About this CD, American Record Guide remarked “Cohler is an amazing musician — I suppose there is nothing he cannot play,” while Listener Magazine said “Cohler possesses such musical integrity and taste that everything he touches seems like the last word. . .There is no other recording I know of as unique. Run, don't walk!”

Mr. Cohler's most recently released CD on the Ongaku Records label featuring the Messiaen Quartet for the End of Time has received rave reviews. His release of Moonflowers, Baby!, on Crystal Records, received the “Outstanding Recording” mark from American Record Guide and Gramophone hailed it for Mr. Cohler's expression of “the poetry that lesser artists miss.” His release of More Cohler on Clarinet was chosen for BBC Music Magazine's Best CDs of The Year. And his debut solo recording Cohler on Clarinet received resounding acclaim, including the coveted top rating of five stars for both sound and performance from BBC Music Magazine. BBC Music Magazine also featured a CD by Mr. Cohler attached to the cover of the magazine, which was distributed to more than 350,000 people worldwide.

In addition to his work as a soloist, Mr. Cohler is an active chamber musician, conductor and chamber music coach. He collaborates frequently with many well known musicians and ensembles including members of the Emerson String Quartet, the Muir String Quartet, The Lark Quartet, The Moscow Conservatory Trio, The Amadeus Trio, The New Jersey Chamber Music Society, The Boston Chamber Music Society, The Wavehill Trio, Boris Berezovsky, Ilya Kaler, Andres Diaz, Charles Neidich, Laurence Lesser, Randall Hodgkinson, and Judith Gordon. Mr. Cohler is one of the most sought after chamber music coaches in the country. Numerous groups that he has coached have won top prizes in the National Fischoff Chamber Music Competition, the Coleman Chamber Music Competition, and the Chamber Music Foundation of New England Competition among others.

He has toured the United States, Japan, Europe, China, Poland, Brazil, Argentina, Chile, Peru, Mexico and Cuba, and performed at many festivals including those of Tanglewood, Aspen, Rockport, Newport, Martha's Vineyard and the Hamptons. He has been a frequent invited performer at the International Clarinet Association's annual ClarinetFest. He has been featured on the prestigious Dame Myra Hess Memorial Concert Series in Chicago. Recent concerto appearances include the Mozart Concerto with the Santo Andre Orchestra in Brasil and the Copland Concerto with the Evergreen Orchestra at the National Concert Hall of Taiwan in Taipei. Recent conducting engagements include Shostakovich Symphony No. 5 with the Simon Bolivar Orchestra in Caracas, Venezuela, and the Tchaikovsky The Nutcracker with the Indian Hill Orchestra (Groton, Massachusetts) and the Granite State Ballet Company (New Hampshire).

Mr. Cohler graduated with high honors in physics from Harvard University. In his first year at Harvard, he won a fellowship to the Tanglewood Music Center Orchestra, of which he was the youngest member. He also held the principal clarinet position of the Colorado Philharmonic Orchestra. He is a member of the clarinet, chamber music and conducting faculties of the Longy School of Music in Cambridge, The Boston Conservatory, and the New England Conservatory in Boston.