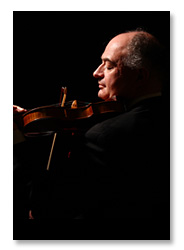 The only violinist ever to win Gold Medals at all three of the world's most prestigious competitions, the Tchaikovsky, the Sibelius and the Paganini competitions, Ilya Kaler is already being compared to the likes of Heifetz and Perlman. Kaler's recordings of the Paganini Caprices have been deemed by American Record Guide to be, "in a class by themselves" combining "the perfection, passion, and phrase-sculpting of Michael Rabin with the energy, excitement, and immediacy of Jascha Heifetz." His recordings of both Paganini Concertos and Caprices, the Schumann Sonatas, both Shostakovich Concertos, the Dvorak Concerto and the Glazunov Concerto have met with equally superlative acclaim. The Washington Post unabashedly lauds him as, "a consummate musician, Kaler is in total control at all times, with a peerless mastery of his violin."

Born into a family of musicians in Moscow, Ilya Kaler showed enormous talent from an early age. At the Central Music School of the Moscow Conservatory he studied under Zinaida Gilels and Yury Yankelevich. He continued his studies with Leonid Kogan and Viktor Tretyakov at the Moscow Conservatory, where he earned both master's and doctorate degrees, and graduated with the Gold Medal Award. He also studied privately with Abram Shtern in the Soviet Union and the United States.

Mr. Kaler has earned rave reviews for solo appearances with distinguished orchestras throughout the world. He has performed with the Leningrad, Moscow, and Dresden Philharmonic Orchestras, the Montreal Symphony, the Danish and Berlin Radio Orchestras, and the Moscow and Zurich Chamber Orchestras, among others. His solo recitals have taken him throughout Europe, Scandinavia, East Asia, and the former Soviet Union.

In recent years, Mr. Kaler has performed with the Detroit, Baltimore, and Seattle Symphony Orchestras, and at the Kennedy Center in Washington D.C. in the United States, and has toured Germany, Ireland, Israel, Italy, Singapore, Korea, Taiwan, England, Venezuela and Japan. In Japan, he played with the New Japan Philharmonic, the Century Symphony Orchestra and the Hiroshima Symphony. Also an active chamber musician, Mr. Kaler has performed for several summers at the Newport Music Festival in Newport, Rhode Island. For five years, he served as Concertmaster of the Rochester Philharmonic Orchestra. Ilya Kaler has also served as guest concertmaster with eht Aspen Music Festival, the Philadelphia Orchestra, the San Francisco Symphony and the Baltimore Symphony Orchestra.

A number of video clips featuring Ilya Kaler may be viewed on YouTube.