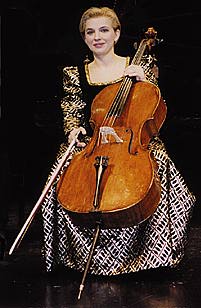 Since winning the All-Ukrainian Competition in 1981, cellist Natalia Khoma has won top prizes at the Budapest Pablo Casals Competition (1985), Markneukirchen (Germany, 1987) and the Tchaikovsky (Moscow, 1990) international competitions, as well as first prize at the 1990 Belgrade International Cello Competition.

A native of Lviv, Ukraine, Ms. Khoma studied at the Lviv Central Music School and the Lviv Conservatory, and from 1982 until 1990, at the Moscow Conservatory with professor Natalia Shakhovskaya.

She has since distinguished herself as a recitalist and soloist with orchestras throughout the former USSR, as well as the United States, Canada, Germany, Norway, Belgium, Italy, Spain, Hungary, Israel and Yugoslavia.