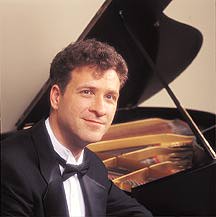 Grand Prize Winner of the International American Music Competition, sponsored by Carnegie Hall and the Rockefeller Foundation, Randall Hodgkinson has performed with orchestras in Atlanta, Philadelphia, Buffalo, Boston, Cleveland and abroad in Italy and Iceland. In addition, he has performed numerous recital programs spanning the repertoire from J.S. Bach to Donald Martino. He is an artist member of the Boston Chamber Music Society, and he performs the four-hand and two-piano repertoire with his wife Leslie Amper.

Mr. Hodgkinson's festival appearances include Blue Hill (Maine), BargeMusic, Chestnut Hill Concerts (Madison, Connecticut), Seattle Chamber Music Festival, and Santa Fe Chamber Music Festival. Mr. Hodgkinson is presently on the faculty of the New England Conservatory of Music in Boston, and the Longy School of Music in Cambridge. Recently, Mr. Hodgkinson gave the world premiere of the Piano Concerto by Gardner Read at the Eastman School in Rochester. His performance of the work has been released on Albany Records. His other recordings include solo works by Roger Sessions and Donald Martino for the New World label, chamber music with the Boston Chamber Music Society for Northeastern Records, and the Morton Gould Concerto with the Albany Symphony for Albany Records.

This release marks Mr. Hodgkinson's debut solo CD, and is his first recording for Ongaku Records.