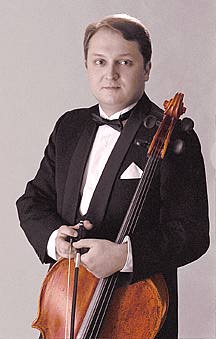 won the Silver Medal at the 1986 Tchaikovsky Competition while still a student at the Moscow Conservatory and thereby launched a distinguished international career as a soloist, recitalist and chamber musician. In addition to performing throughout the former Soviet Union, he has toured Europe and the United States earning enthusiastic praise in both traditional and contemporary repertoire. Born in Yerevan, Armenia, Mr. Bagratuni began his musical education there at the age of seven. He continued his studies at the Tchaikovsky State Conservatory in Moscow where he was tutored by professor Natalia Shakhovskaya. In the United States, Mr. Bagratuni was awarded the Artist Diploma of the New England Conservatory of Music under the direction of professor Laurence Lesser.

As a chamber musician he has appeared with the Chamber Music Society of Lincoln Center, the Newport Music Festival, the Russian Winter Festival in Moscow, the El Paso Pro Musica Festival, and international festivals in Italy and Switzerland. His solo appearances have included recitals in Moscow, St. Petersburg, Leipzig, Dresden and Berlin; Carnegie Hall's Weill Recital Hall, Worcester's Mechanics Hall, and Jordan Hall in Boston. A recent performance there of the Shostakovitch Sonata in D Minor prompted the Boston Globe to hail it as "one of the best performances of the year."

In addition to his solo activities, he is a member of the Moscow Conservatory Trio and is a faculty member at the University of Illinois at Champaign-Urbana.