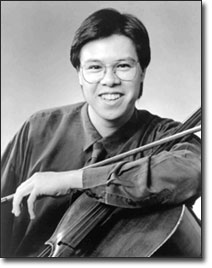 Cellist Andrew Mark received his Bachelor and Master of Music Degrees from the New England Conservatory of Music. His teachers have included Bernard Greenhouse, Laurence Lesser, Colin Carr, and George Neikrug. Mark is an active member of Boston's classical music community and performs and records with such groups as the Boston Symphony Orchestra and the Boston Pops Esplanade Orchestra.

From 1993 to 2000, Mr. Mark was the cellist of the critically acclaimed group The Core Ensemble, a nationally-touring trio of cello, piano, and percussion dedicated to the performance of contemporary music. Since its inception in 1993, the group has garnered national recognition for its efforts in commissioning new works featuring the unique instrumental combination and for its development of multi-genre works incorporating the trio with other mediums such as theater and dance. In 2000, the group was awarded the prestigious Eugene McDermott Award in the Arts from the Massachusetts Institute of Technology for its groundbreaking work in the chamber music field. The Core Ensemble has recorded for New World Records and has released a disc featuring solo, duo, and trio works of Pulitzer Prize winning composer Donald Martino and has released its newest discs featuring trios of Dan Welcher, Marilyn Schrude, Marjorie Merryman, and Ross Bauer, and a CD featuring the Triple Concerto of Bernard Rands, commissioned by the Core Ensemble.

From 1987 to 1993, he was cellist of the Boston Composers String Quartet which performed throughout the United States and in Europe. With this ensemble he recorded the string quartets of Daniel Pinkham, Gardner Read, and Leon Kirchner. An accomplished advocate of new music, Mark has collaborated with some of the world's most distinguished composers including Witold Lutoslawski, Donald Martino, John Harbison, and Leon Kirchner.

As a concerto soloist, Mark has performed with the Florida Philharmonic, the Cleveland Chamber Symphony, the Palm Beach Opera Orchestra, the New Hampshire Symphony, the Yamagata Symphony Orchestra of Japan, and with several orchestras in the Boston area. In 1988, Mark was the first place winner of the United States Artistic Ambassador Competition and has since performed recitals and given master classes throughout the United States, Europe, South and Central America, and the Far-East. In 1990, he was one of six finalists in New York's East-West Artists International Competition and in 1993, Mark was winner of the silver medal at the Osaka International Chamber Music Competition in Japan.

He has been a guest artist at several summer music festivals including the Newport Music Festival, the Contemporary Music Festival at Tanglewood, the Chautauqua Festival, June in Buffalo, Florida International Festival, and the Castle Hill Festival. He has recorded for New World, Koch, Albany, Dorian, CRI, Ongaku, and Neuma Recordings.

Mr. Mark continues an ongoing commitment to teaching. His students have been top prize winners in the Boston Symphony Youth Concerto Competition and in the State and National Competitions of the American String Teachers Association, and have been full fellowship recipients to fine music festivals such as Aspen and Tanglewood.

Mr. Mark is a member of the music faculties of the New England Conservatory Preparatory Division, and The Boston Conservatory where he is also Chair of the String Department.