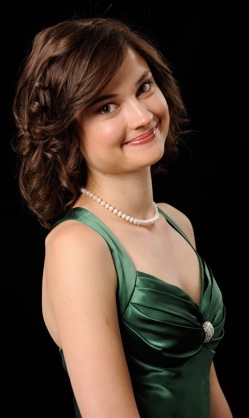 Born in 1986, Ms. Vitkauskaite studied at the National M. K. Ciurlionis School of Arts in Vilnius, Lithuania, from which she graduated with honors. In 2004, she won a scholarship to study at the United World College of the Adriatic in Italy. She also studied chamber music with members of the Trio di Trieste at the International Chamber Music School. Upon graduating in 2006, she was awarded the prestigious International Baccalaureate Diploma with the highest marks.

Since 2006, she has been studying at The Boston Conservatory with Michael Lewin, where she won the H. Wilfred Churchill piano scholarship competition both in 2007 and 2008. In 2008, she received her Bachelor degree and began work on a Masters Degree.

Ms. Vitkauskaite has performed as soloist with the Kaunas, Latvian, Kaliningrad Philharmonic Orchestras and most recently with I Solisti di Perugia. She has played in many festivals around the world including ones in Kaunas (Lithuania), Moscow (Russia), Pyrénées (France), and the Music Fest Perugia (Italy), and she has given concerts in Austria, Belgium, Croatia, Cyprus, France, Israel, Italy, Latvia, Lithuania, Russia, Serbia and Montenegro, Slovenia, United Kingdom and the United States.

Ms. Vitkauskaite is also very active as a chamber musician having performed with violinist Yuliya Haurliuk (Belarus) and cellist Sebastian Plano (Argentina). This season marked the release of her debut CD with clarinetist Jonathan Cohler on Rhapsodie Française (Ongaku 024-121). The duo plans to release several more recordings on Ongaku in the coming seasons.